The British Vice Royal in British Occupied Ireland, Theresa Villiers, while on a visit to Dublin, at the start of October, asked, about the internment without trial of republican Marian Price interned in May 2011, by her predecessor Owen Paterson, claiming to revoke a non-existent licence, on which she had been supposedly released in 1980, stated. “A number of people have raised this with me, so I know it’s a sensitive issue, I know there is concern about it, but the reality is that this is not a decision for me, this is a decision for the Parole Commissioners and they are conducting their review at the moment. If I were to seek to intervene politically in what is a legal process I think that would be wholly inappropriate.” 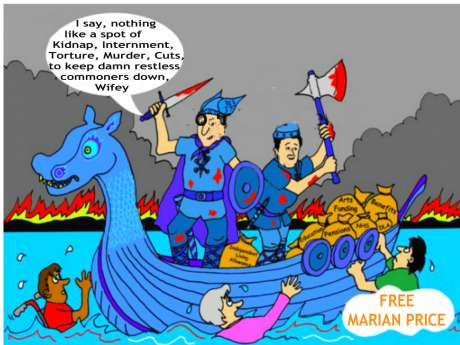 Cutting Commoners Down to Size
The British Vice Royal in British Occupied Ireland, Theresa Villiers, while on a visit to Dublin, at the start of October, asked, about the internment without trial of republican Marian Price interned in May 2011, by her predecessor Owen Paterson, claiming to revoke a non-existent licence, on which she had been supposedly released in 1980, stated. “A number of people have raised this with me, so I know it’s a sensitive issue, I know there is concern about it, but the reality is that this is not a decision for me, this is a decision for the Parole Commissioners and they are conducting their review at the moment. If I were to seek to intervene politically in what is a legal process I think that would be wholly inappropriate.”

This statement is at best disingenuous, a clearly irresponsible deception and non factual. In May 2011, Marian Price was arrested and interned to Maghaberry Prison on trumped up accusations, after holding a piece of paper on a windy day, at a traditional Easter commemoration, from which a masked man read. She was taken to Maghaberry high security prison an all-male prison and placed in solitary confinement, where she was accused of, ‘encouraging support for an illegal organisation’.

Marian has now been in prison for 17 months, during which time neither her lawyers or Marian, have been allowed to see any of Britain's ‘alleged’ evidence. Having been previously force fed 400 times by the British in an English prison, in considerable, ill health, distress, extreme pain and close to death, she was given a Royal Prerogative of Mercy, witnessed by Cardinal O'Fiach the spiritual leader, of Ireland's largest Christian denomination at the time.

Villier's predecessor Patterson claimed, that this Royal Pardon was either lost or shredded by his bureaucrats, something both he and Villiers are clearly responsible. This the first and only time that this has happened. Patrick Ramsey, a Social Democratic Labour member of the elected British Assembly, wrote to Paterson about this "lost" pardon and formally om his elected capacity asked;

-- Where would Mrs. Price-McGlinchey's pardon have been held?

-- How many staff are currently seeking the document and in what departments?

-- Are those looking for it doing so on a full-time basis, if not, why not?

-- Has the Northern Ireland Office received comment from the judiciary on the apparent loss of the document?

-- How many Royal Prerogative's have been lost (or destroyed) that the government has record of?

-- Who is ultimately responsible for the care and maintenance of the building where these documents are kept?

-- What communication [has Paterson] personally had with this person/Department?

-- Can [Paterson] confirm the Department is still seeking the document and will do so until it is found?

Again the unelected English Vice royal Paterson contemptuously dismissed the elected Irish assembly member, Ramsey's inquiry, the fruits of a Peace Process, after 30 years of war, stating that "unfortunately the Royal Prerogative of Mercy was not recovered but had no bearing on current circumstances. Patterson went even further and demanded, the local elected Assembly be downsized and it's 'peace process' structures be dismantled, as he regarded it simply as a talking shop, that interfered with unelected, Vice Royal English rule in Ireland.

Ms. Villiers herself, to be sure, to be sure, apparently, wrote an academic legal book, titled the Law of Estoppel, Variation and Waiver while apparently being an Academic of King's College London. She would hopefully then, be vaguely aware of her responsibilities and familiar with British law. It follows therefore, if the institutions to which she has been aligned, have any international credibility, she ought to be aware of the serious nature and consequence, of perverting the course of her own supposed British Justice system, something clearly not a reality in British Occupied Ireland, as this affair demonstrates to any objective observer not insignificant in a Peace Process without Due Process.

The facts of the case are as follows;

• Marian has been kept in solitary confinement in a ‘male’ high security prison
• She is effectively interned without a trial, sentence, or release date.
• She has not been given any timescale for any investigation.
• She has not been allowed to see the evidence that the state claims to have
• Her release has been ordered on two occasions by judges. However, on both occasions the secretary of state has overruled those decisions.
• The secretary of state claimed he ‘revoked Marian’s license’. This is despite Marian never being released on license. She was given a Royal Pardon.
• Marian’s Royal Pardon has ‘gone missing’ from the home office (the only time in history). The secretary of state has taken the view that unless a paper copy can be located – it must be assumed that she does not have one.
• Despite no ‘license’ existing for her release from prison in 1980, it is the non-existent license that is being used to keep her in prison.
• She can only be released by Theresa Villiers the current Secretary of State responsible despite her protestations

The charges against Marian Price were thrown out of their own British courts, for lack of evidence by a Judge, the last time she appeared and now the very same charges have been re-instated against Marian again in a British judicial system, that can provide any tangible evidence as to the reason for her internment. The farcical affair, demonstrates the British have learned nothing from their intransigence around Bloody Sunday and further the disingenuous nature of Cameron's belated, superficial apology. Neither have they learned from their collusion in the sectarian murder of thousands of Irish innocents or their shoot-to-kill policies, or any of their errors, in the last forty years of occupation and repression in British Occupied Ireland, never mind over 800 years of bloody oppression of the whole island of Ireland. Ms Villier's statement on the Marian Price debacle, smacks of the same arrogance, falshoods, injustice and sheer bloody mindedness, so much part, of their far-reaching colonial and recent bloody history.

Marian Price, is a symbol of her community, an Irish community, that the British ruling elite have spent years, trying and failing to silence and and subjugate. They have tried and continue to try, batter it into submission with internment, torture, state sanctioned murder and genocide. Milosevic's role in the tragic massacre an war crime of Srebrenica, was chicken feed, compared to the role the Villier's family have played in ethnic cleansing, war crimes and the holocaust in Ireland. Marian Price will not be silent until she is six foot under and for her lack of compliance she must silenced with political internment torture, without a proper trial, by the British occupiers and Ms Villiers is another insincere, superficial expensive mouthpiece for their criminal activity which includes kidnap. Despite her long family ancestry of being directly involved, as previous Vice royals in the Irish Holocaust, that cost 6,257,456 Irish person's lives, Villiers comes to Ireland, like so many of her predecessors, ignorant, not surprising with the sort of irresponsible, selective, subjectivity her statement demonstrates.

Marian Price has suffered enough and while we may not have agree with her tactics, we must defend her human rights. Britain has never voluntarily been interested in human rights or fairness and their intransigence is nothing new. For those of us who have been willing, despite considerable historical evidence to the contrary, to give the Peace Process in Ireland a fair chance and accept the challenge of it being an alternative avenue to physically resisting British political state violence, the Marian Price affair, is a poor omen. There have been many superficial calls for peace in Ireland but for those of us confronted with the daily reality of political violence, we know, as sure as night follows day, a Peace Process without Due Process or justice is going nowhere.

Ms Villiers despite her education at the King's Inn, appears to be selectively ignorant of this obvious fact or perhaps its just plain old familiar British hypocrisy and more of their worldwide piracy. Ms Villiers after graduating, worked as a barrister and as a lecturer at King's College London, 1994–99, perhaps like a lot of her colleagues, she partakes of an extra sup with them, before making public utterances, that fans the flames of injustice, that incites otherwise peaceful people to desperate and unwise reactionary violence.

Marian Price must be freed, that is the challenge to you and to all of us who claim to love peace. For those of us of the Irish diaspora, we are all Marian Price, consciously or subconsciously and we have as much freedom or the lack of it, as we allow irresponsible leaders like Villiers, and her long line of British blue bloods, steal from us in Ireland and worldwide. We need international help to achieve this peacefully, despite Tory provocation in the interests of their political sponsors, the British industrial war complex.
Related Link: http://irishblog-brianclarkenuj.blogspot.com/
Posted by Unknown at 2:11 PM